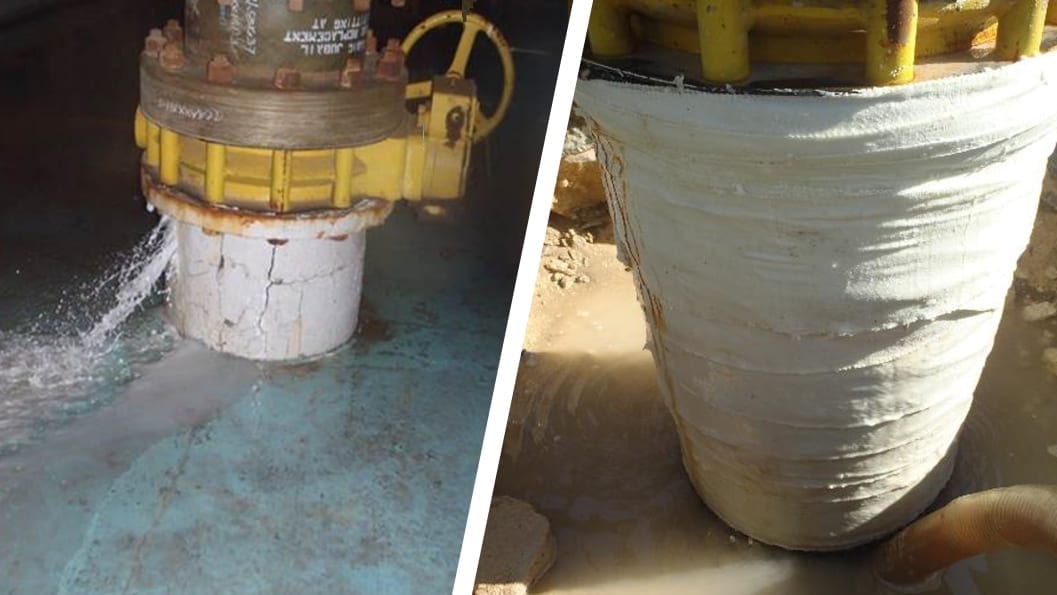 After several failed attempts to repair a badly cracked 250mm PCCP pipe stub with no isolation valve, an engineering company in Saudi Arabia turned to Sylmasta for a live leak repair method

The prestressed concrete cylinder pipe (PCCP) stub was connected to a main header operating under 4 bar pressure. Wear and tear had caused numerous cracks to appear in the stub, through which significant amounts of water was escaping and causing flooding.

Because there was no isolation valve, preventing flow to the stub from the main header was impossible. Shutting off the main pipe for carrying out either a repair or replacement was impractical and there was not enough room between the stub and the floor to fit a pipe repair clamp.

A live leak repair method was therefore needed. This proved extremely challenging and after several attempts which failed to make any reductions in the amount of water being lost, the engineers charged with fixing the stub turned to Sylmasta.

As this was a live leak, Wrap & Seal Pipe Burst Tape was used to seal the cracks on the stub. Wrap & Seal is made from self-amalgamating silicone and stretches by 300 percent to fuse into a solid rubber band around pipework.

Multiple Wrap & Seals were applied down a 200mm area of the stub. In the same way in which a single tape amalgamates to itself, these separate tapes fused together to create a repair with enough pressure resistance to seal the cracks.

Once the engineers were satisfied that the leaks had been suitably arrested, the stub was overwrapped with SylWrap HD Pipe Repair Bandages.

SylWrap HD is a composite repair wrap with a water activated resin which sets rock hard in minutes. It reinforced the repair by providing an impact resistant sleeve around the PCCP pipe stub

After this section of the stub had been sealed, it was decided to reinforce the underground section at the same time. Doing so would protect the remainder of the ageing pipe from future ruptures, which might prove difficult to identify if they were leaking below the floor.

The floor was dug up around the stub to reach the pipe. Once accessed, a further 200mm section of previously underground pipe was wrapped with SylWrap HD.

One final covering of SylWrap HD was then applied over the bandages already covering the two phases of the repair, encompassing the entire stub and providing reinforcement before the floor was relaid.

Category: Case Studies
Tags: Pipe Repair Contractor Case, SylWrap HD Pipe Repair Bandage, Wrap & Seal Pipe Burst Tape
Cookies are used to ensure you are given the best experience on our website. By continuing to browse the site you are agreeing to our use of cookies.OkPrivacy policy