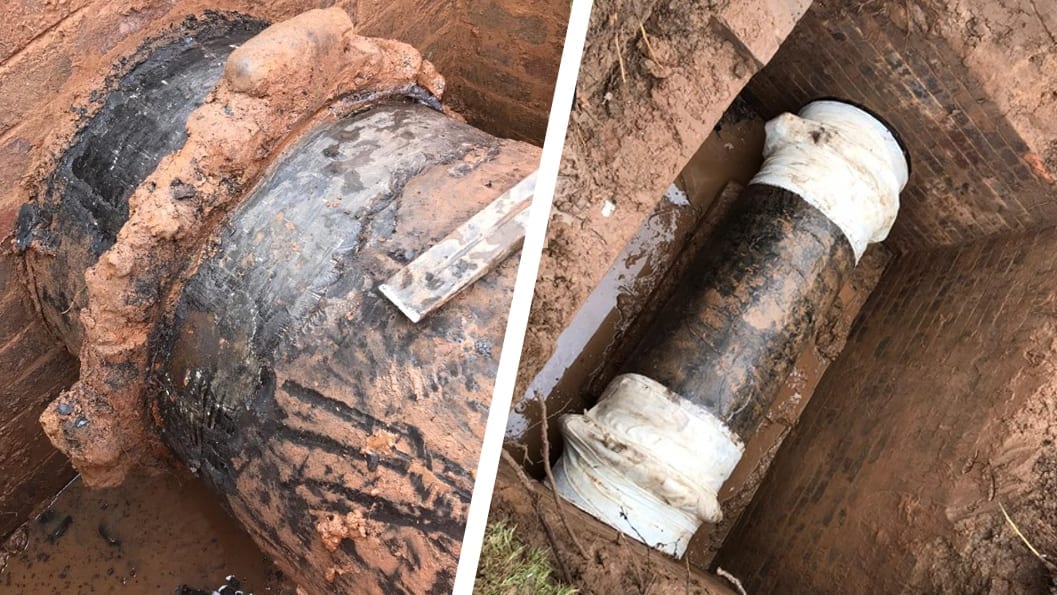 A 2 metre section of 650mm ductile iron pipe buried in a former underground inspection pit is excavated by a UK water company to undergo repair after it was found to be leaking from two coupling joints.

The pit had originally been an inspection chamber housing a valve. Many years ago, the valve had been replaced with a two metre section of straight ductile iron pipe attached to the existing pipe carrying mains water via two coupling joints.

After the straight section was fitted, the whole chamber had been filled in with earth and covered over, where it remained forgotten. That was until the water company responsible for the pipe rediscovered it during maintenance work.

Soil within the pit was found to be extremely muddy, suggesting that the pipe was leaking in the chamber. After excavating the entire pit to investigate further, the water company discovered that the pipe was in poor condition with slight seepage from both couplings.

The water company decided to seal the couplings to prevent further leakage. Each coupling was 80mm wide but 100mm higher than the 650mm pipe, presenting contractors with an awkward ridge that the repair needed to wrap over.

There were also challenges with the clearance in the pit. The two couplings gave only 35mm underneath in which to work. Conditions within the chamber meant that any repair material wrapped around the pipe would be in danger of picking up mud and dirt off the floor.

To overcome this, a polythene sheet was squeezed underneath the pipe. For sealing the couplings, multiple Wrap & Seal Pipe Burst Tape were used to build a repair over and around the couplings.

Wrap & Seal is made from self-amalgamating silicone which fuses to form a solid rubber band for live leak repairs. Separate Tapes will also fuse to each other, this being how the repair was built up and the difficult ridge shape of the coupling sealed.

Each coupling and the surrounding area was then encompassed with a SYL1266HD SylWrap Pipe Repair Bandage. SylWrap HD is a composite repair wrap with a water activated resin which sets rock hard in minutes to provide an impact resistant layer of protection.

SYL1266HD Bandages are 300mm wide, giving them more than enough coverage to be moulded around the raised coupling. With the reinforcement provided by SylWrap, the water company could rebury the pipe safe in the knowledge that the leaks were sealed and the pipe had been suitably fortified to prevent further deterioration.

Both Wrap & Seal and SylWrap HD have WRAS approval, meaning that they are certified to British standards as safe to use on pipes carrying drinking water. Because the pipe carried mains water, it was a legal requirement that any repair materials used had to be WRAS approved.