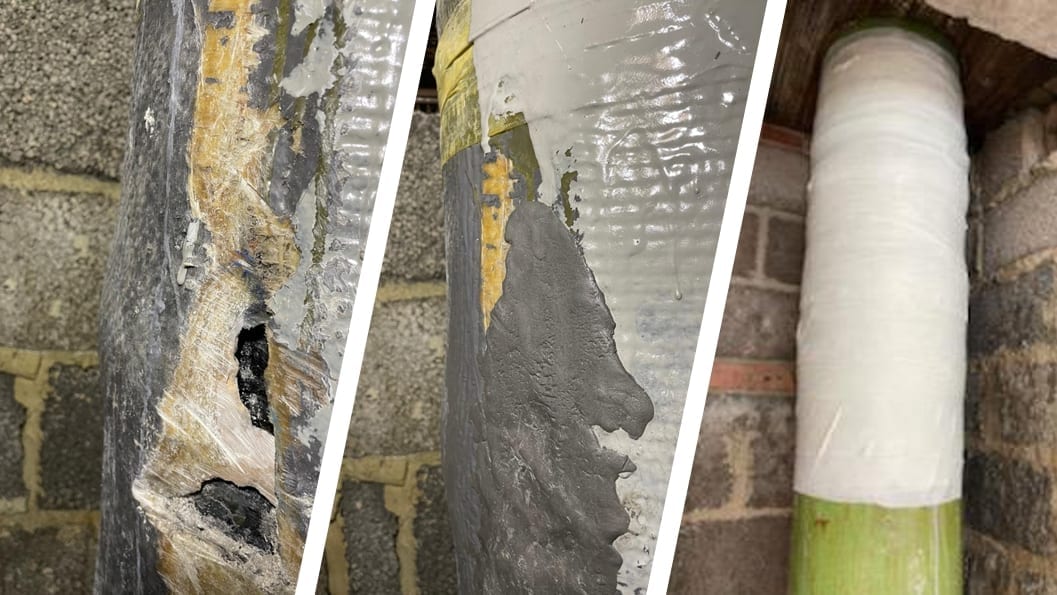 On a day when temperatures in London reached 27ºC, a burst 300mm water return pipe forced the shutdown of a hospital air conditioning system until a SylWrap emergency leak repair was made

The 300mm water return pipe was located in a cabinet alongside other service pipes. It burst through a previous repair attempt, requiring an immediate shutdown of the air conditioning system as water escaping the pipe at 12 bar pressure would have caused internal flooding.

This shutdown left the hospital building without any temperature control on the hottest day of the year. The burst was initially discovered in the middle of Sunday night, at which point the hospital immediately contacted their maintenance team.

The maintenance team arrived at Sylmasta HQ first thing on Monday morning to collect the products needed to carry out a repair. Sylmasta technicians were also able to offer technical assistance based on photos of the burst air conditioning pipe.

Coarse fibreglass strands remained on the pipe from the previous repair. It was decided to cut these away to enable the maintenance team to locate the actual leak site and have a better chance of sealing it.

Two distinct leak areas were stripped back, revealing two deep cavities in the pipe. These were filled with Superfast Steel Epoxy Putty, a fast curing putty supplied in stick format.

Superfast Steel is kneaded by hand and pushed into areas of damage whilst soft. Within 5 to 10 minutes, the putty had hardened to seal the cavities in the pipe.

Because of the inconsistent substrates in this case, it was decided to take a ‘belt and braces’ approach to the repair and use Wrap & Seal Pipe Burst Tape to provide additional leak sealing security.

The entire leak area was wrapped with multiple layers of Wrap & Seal, a self-amalgamating silicone repair tape which fuses to form a solid rubber band for high-pressure resistant repairs.

Combining Superfast Steel and multiple Wrap & Seals created a repair with resistance to the required 12 bar and ensured that there was no chance of seepage of water around the epoxy putty.

Once it had been established that the leak had been completely sealed, the application was finished with the wrapping of two SYL866HD SylWrap HD Pipe Repair Bandages over the repair.

SylWrap HD is a water activated composite wrap which sets rock hard in minutes. It provided a protective sleeve around the pipe, reinforcing the repair even further.

As the temperature began to heat up during Monday morning when the pipe remained out of operation, numerous alarms in the hospital building were triggered as equipment and machinery began to overheat without any air conditioning.

The ease and speed with which the products in the SylWrap Pipe Repair range can be applied meant that by Monday afternoon, the pipe was fixed and the air conditioning system back in operation.

Without the repair method and the technical assistance provided by Sylmasta, the hospital could have gone days without any air conditioning – a clearly unsustainable situation when temperatures in London were peaking at 27ºC.