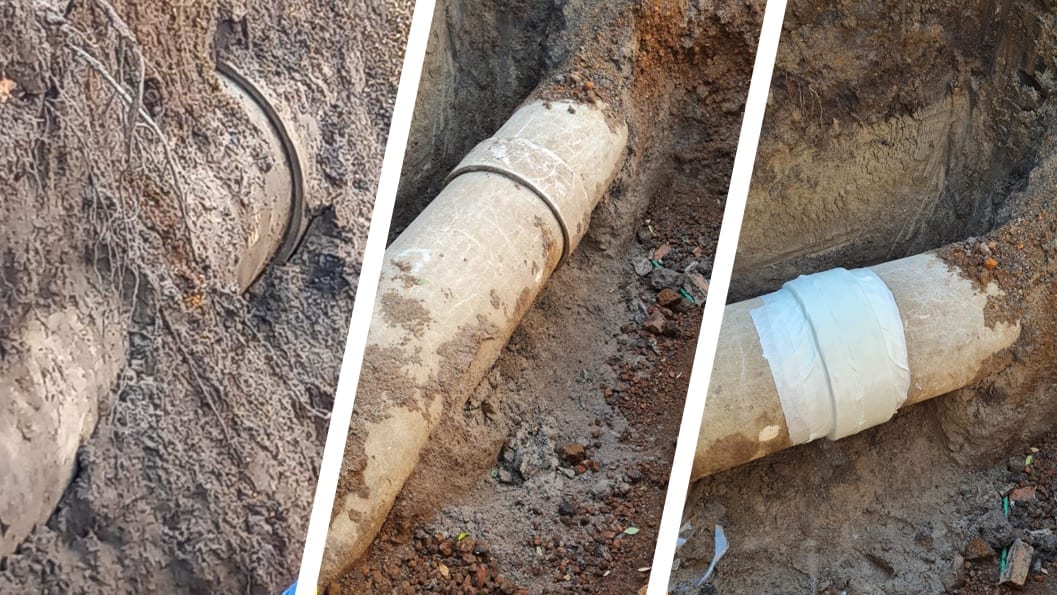 When a water utility company in Mexico discovered that a 600mm asbestos cement pipe was leaking from both ends of a sleeve, they needed to access the buried line and seal the gaps with a repair method flexible enough to be effective when applied in a trench.

The water utility company had been carrying out maintenance work on a 500mm buried pipeline outside the city of Morelia, around a four hour drive from Mexico City.

Whilst undertaking this work, it was discovered that there was a failure in a 600mm asbestos cement parallel line. Water was escaping from both ends of a sleeve on the 600mm pipe.

To replace this damaged section would have been difficult; the pipeline passed under a building less than 10 metres away from the location of the leaking sleeve. Excavation of the pipe would also have been challenging.

A trench was dug to access the asbestos cement pipe, affording 500mm of space on one side, 1.7 metres on the other and minimal space between the line and the ground. Any repair method therefore needed to be effective in tight spaces.

Superfast Copper Epoxy Putty was used to plug the gaps between the sleeve and the surface of the pipe, through which water was escaping.

The Putty was kneaded by hand and pushed firmly into the gaps at both ends of the sleeve. Within 10 minutes, the Putty had begun to harden to seal the space.

To further reinforce the putty and add another leak sealing layer, each joint was wrapped with a Wrap & Seal Pipe Burst Tape. Despite the space constraints, the Tape was stretched by the maximum 300 percent to form a solid silicone band.

Completing the application, a SylWrap HD Pipe Repair Bandage was used to encompass the entire sleeve. SylWrap HD provided one final, impact resistant layer of protection to the pipe before it was re-buried.

All the products required for the repair were supplied as part of a SYL-PRO-50-150 SylWrap Pipe Repair Contractor Case, containing enough products to make up to six live leak repairs.

In this instance, the Case was the most suitable product as multiple Wrap & Seal and SylWrap HD were required due to the size of the asbestos cement pipe requiring repair.

The purpose of the Contractor Case normally though is to allow regular users to carry out several repairs. It is designed to be kept on-site or on the van, enabling rapid response to leaks when they are identified.

With the water utility company currently investing in leak detection technology, Sylmasta are providing assistance as to how the problems that the new technology identifies can be repaired as quickly as possible.

The Contractor Case works hand-in-hand with leak detection, equipping contractors with everything they need to fix leaks and burst as soon as they are discovered.

Category: Case Studies
Tags: Pipe Repair Contractor Case, Superfast Copper Stick Pipe, Universal Pipe Repair Kit, Wrap & Seal Pipe Burst Tape
Cookies are used to ensure you are given the best experience on our website. By continuing to browse the site you are agreeing to our use of cookies.OkPrivacy policy