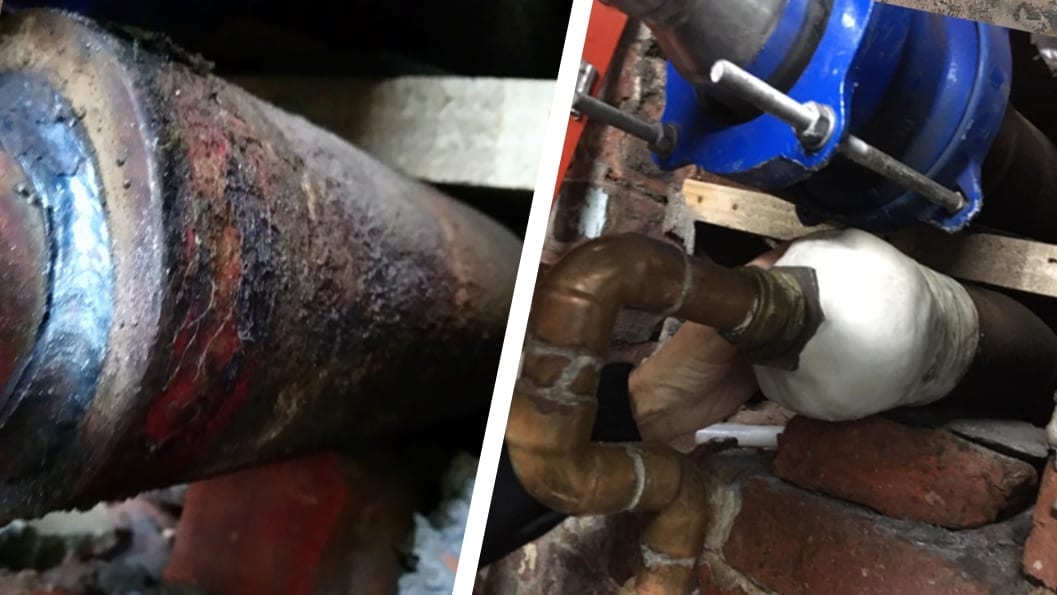 A church central heating system had suffered heavy damage caused by corrosion and begun leaking at the point where a 100mm cast iron pipe met a 50mm steel pipe via a welded steel plate, leading to a challenging leak repair and encapsulation application.

Several years previously, the central heating system in the church had undergone renovations when a 100mm cast iron pipe had been stepped down to a 50mm steel pipe.

To facilitate this, a 6mm thick steel plate had been attached to the end of the larger cast iron pipe with a hole cut into the middle, through which the smaller steel pipe was attached and welded.

Since the work had been carried out, the system had become badly corroded and was now leaking from numerous areas around the welded joint.

When a similar problem had developed on another heating pipe, the church had fitted a pipe repair clamp at considerable expense. Such a repair method was not possible on this occasion as the new leak was in a restricted space with no room for a clamp to be applied.

Initially, the church called in welders to try and fix the problem, but this just caused further leakage and left an even more uneven pipe surface needing to be sealed.

The main leak was between the steel plate and the 100mm cast iron pipe with particularly heavy corrosion at the point where they met. Once the corrosion was filed back, this was relatively straightforward to repair using a SylWrap Universal Pipe Repair Kit.

Wrap & Seal Pipe Burst Tape was applied around the pipe, fusing to form a solid rubber band over the problem area to seal the leak. This was then overwrapped with a SylWrap HD Pipe Repair Bandage, providing a rock hard, impact resistant shell to reinforce the initial repair.

More challenging was the repair of the joint between the smaller 50mm steel pipe and the steel plate. Here, leaking was caused by uneven welding, whilst a threaded section of pipe close by was also suffering from a leak.

It became clear that a softer repair material was needed to smear into the threaded section and to penetrate into the weld. Because of the complexity of the repair, Sylmasta recommended Sylmasta AB Original Epoxy Putty.

AB Original is a smooth-setting epoxy with a two hour cure time. This longer working time allowed for the putty to be more carefully applied, encapsulating the whole section where the 100mm pipe, the 50mm pipe, and the steel plate all met.

The church were supplied with 1kg of Sylmasta AB, more than enough for their application. Unused AB Original stays fresh when left in its original packaging, ensuring the church has a supply of epoxy putty for any future applications.

Sylmasta AB Original putty was smoothed over the welded joint, filling in all imperfections and sealing all leak areas. It has excellent corrosion resistance, further protecting the pipe from future attack, and provided a smooth, ceramic-like finish to the application.

When the church first contacted Sylmasta, they had been looking for a repair method that would temporarily fix the leaking central heating system until funds allowed for either a longer lasting solution or for a new pipe to be installed.

Instead, the repair provided by Sylmasta will be permanent and was made at a fraction of the cost of other options, saving the church a considerable amount of money.

Category: Case Studies
Tags: AB Original, Pipe Repair Contractor Case, SylWrap HD Pipe Repair Bandage, Universal Pipe Repair Kit, Wrap & Seal Pipe Burst Tape
Cookies are used to ensure you are given the best experience on our website. By continuing to browse the site you are agreeing to our use of cookies.OkPrivacy policy