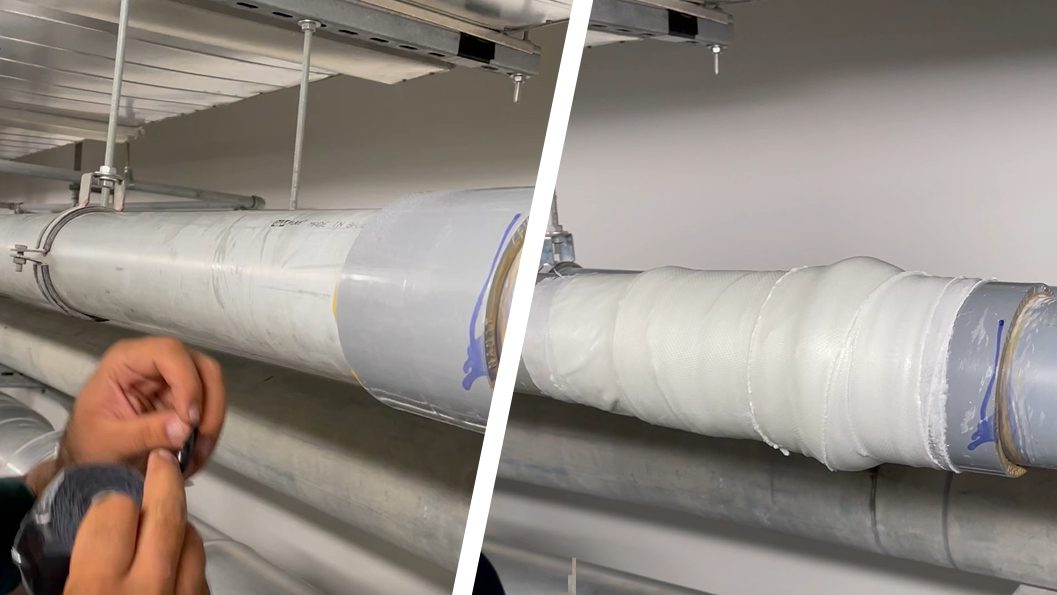 When a 100mm UPVC pipe which was part of an important system at Bahrain International Airport began leaking from a step joint, a quick-and-easy live leak repair method was required as shutting down the line was not an option.

UPVC is a strong and versatile pipe material which is assembled using a solvent cement to bond pieces together. Sometimes, these bonds can loosen and begin leaking, which is what happened to the 100mm pipe at Bahrain Airport.

The leak in question was through a step joint connecting two sections of pipe together. The pipe could not be shut off for a repair because of the importance of the airport system it supported.

This meant that the normal method Sylmasta recommend to clients for sealing a leaking step – by using a Superfast Epoxy Putty Stick to plug the gaps between the joint and the pipe – would not be effective because the pipe was wet.

The airport therefore had to use Wrap & Seal Pipe Burst Tape as their sealing material. Wrap & Seal is a self-amalgamating silicone repair tape which stretches by 300 percent, fusing to form a solid rubber band over leak areas.

Using Wrap & Seal on a step is not as straightforward as wrapping a straight section of pipe. To create a repair capable of sealing the step between the 100mm UPVC pipe and the sleeve, the maintenance team carrying out the application began wrapping approximately 100mm away from the joint.

After approaching the sleeve by overlapping the Tape by 50 percent, they then built up layers of Wrap & Seal immediately next to the joint. This created a ridge. When this ridge reached near-level height with the step, the application of the Tape continued for a further 50mm across the step joint to fully encompass it.

Two 50mm x 4m Wrap & Seals were required before it was established that water had stopped escaping the joint and the leak was fully sealed. The repair was then completed by applying a SylWrap HD Pipe Repair Bandage over the Tape.

SylWrap HD is a composite repair wrap with a water activated resin which sets rock hard in minutes. The Bandage was wrapped around the pipe and smoothed down using water poured onto the pipe from a bottle. It cured to provide an impact resistant, protective shell.

The entire repair was carried out in less than 30 minutes whilst the pipe remained in operation. The two Wrap & Seal Tapes and SylWrap HD Bandage were supplied to the maintenance team as part of a SYL-PRO-633 Pipe Repair Contractor Case.

A Contractor Case contains enough products to make up to six live leak repairs on pipes of all types and diameters. The Case is easy-to-store on site and transport, ensuring that everything needed to fix a leaking pipe is close to hand and enabling repairs to be made as soon as problems are identified.

Following the success of the 100mm UPVC pipe repair, the maintenance team have since gone onto use Contractor Cases at the Airport to fix 150mm and 200mm pipes suffering from similar problems.

Category: Case Studies
Tags: Pipe Repair Contractor Case, SylWrap HD Pipe Repair Bandage, Universal Pipe Repair Kit, Wrap & Seal Pipe Burst Tape
Cookies are used to ensure you are given the best experience on our website. By continuing to browse the site you are agreeing to our use of cookies.OkPrivacy policy