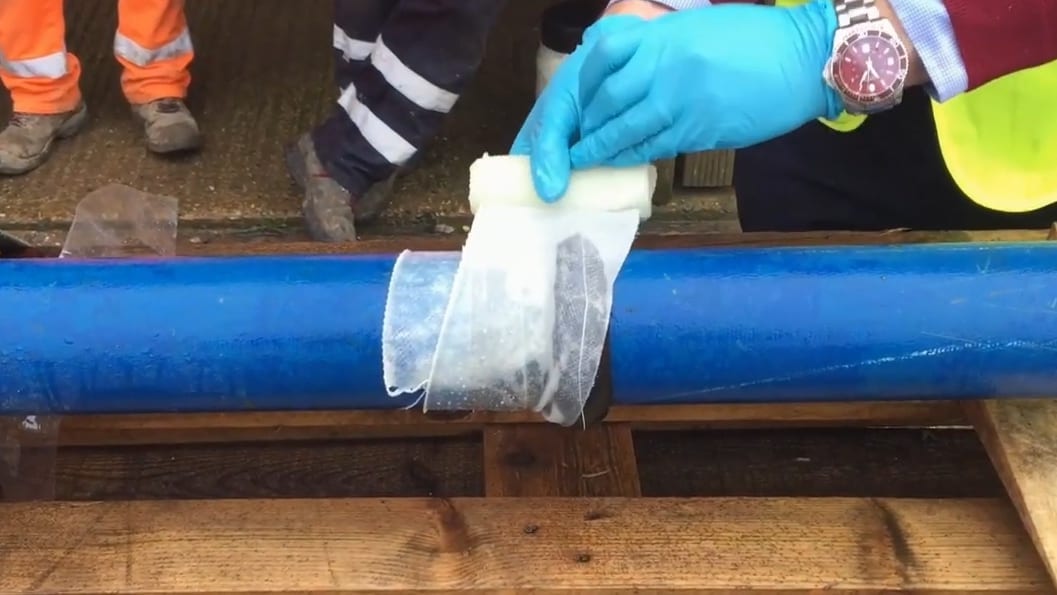 This video was filmed during an on-site demonstration as part of the Sylmasta Roadshow, showcasing to a water supply company in the United Kingdom how a SylWrap Pipe Repair Kit can permanently fix a live leak in under 30 minutes.

About this Pipe Repair Video

The pipe being repaired was made from steel and had a large split cut into it. To showcase the pressure resistance of a SylWrap Pipe Repair Kit to the water company, the pipe was put under 6bar for the demonstration.

Wrap & Seal Pipe Burst Tape was used to seal the initial leak. Wrap & Seal is made from self-fusing silicone and stretches by three times its length. When wrapped around a leaking pipe, it forms a solid rubber band over the leak area, creating a high-pressure repair.

The initial repair was then overwrapped with a SylWrap HD Pipe Repair Bandage. SylWrap is a composite fibreglass repair wrap with a water-activated resin. It is applied to the pipe to provide a rock-hard, impact resistant layer, reinforcing the repair through a protective shell.

Only one Wrap & Seal was used for this repair, but additional tapes could have increased the pressure resistance up to 30bar. To determine how many tapes are needed for a specific application, please input your data to the Wrap & Seal Repair Calculator to formulate the optimum repair.

Repairs can be made to leaking pipes in domestic settings, such as kitchen and bathroom pipes, as well as major pipelines involved in infrastructure and industry.

Both Wrap & Seal and SylWrap HD have WRAS approval, meaning that they can be used safely on pipes carrying drinking water. Repairs are temperature resistant to 200ºC and effective on pipes carrying hot and cold water and chemicals.

No training is required to make a SylWrap live leak repair; simply follow the instructions provided with the product.

Kits to Make This Repair

Category: Videos
Cookies are used to ensure you are given the best experience on our website. By continuing to browse the site you are agreeing to our use of cookies.OkPrivacy policy