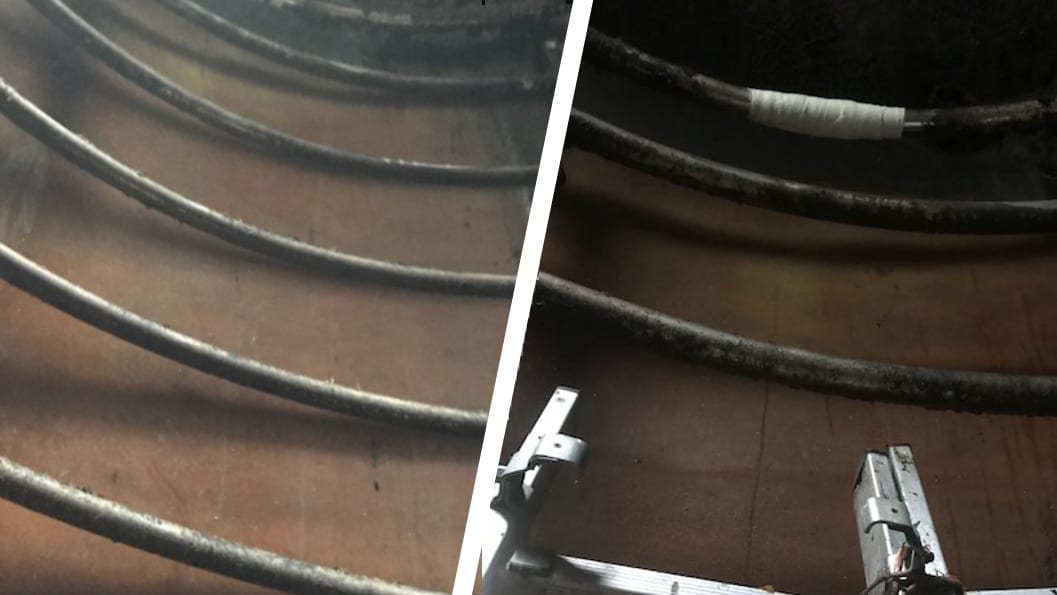 Small pieces of farmyard debris had inadvertently entered a Norfolk farm’s biomass plant as part of feedstock, breaching a stainless steel pipe at the top of a 20 feet tall heating tank which now required a flexible and lightweight repair carried out from a ladder.

Anaerobic digester biomass plants are becoming more common on farms in the United Kingdom. They turn waste organic material – known as feedstock – into gas used for fuel and nutrients for crops. Feedstock can include specially grown plant matter, other waste plant material and animal manure.

At the core of a biomass plant system is its digester. Here, the feedstock is fed into an airless container where it ferments. A gas called biogas is captured from the process and used for fuel. The farm uses this fuel to power itself and can even sell surplus energy to the national grid.

The remaining material is known as digestate and is separated into liquid and solid form. The liquid digestate is sprayed back onto the farm as fertiliser. The dried-out solids have multiple uses, including in animal bedding and creating fibre plant pots.

Before adding the initial feedstock to the digester, the biomass plant on the farm in Norfolk had a pre-heating tank. Here, the farm mixed feedstock with some liquid digestate and heated it to the same temperature as the main digester. This enabled them to avoid adding cold feedstock straight to the digester, which can impact on the fermentation process.

Multiple stainless steel pipes were located around the inside of the heating tank. It was one of these towards the very top which had become damaged when small pieces of farmyard debris had inadvertently been mixed in with the feedstock and dropped into the tank from the inlet above.

The farm’s preferred method of dealing with pipe repair applications was to weld. This though was not feasible; the leaking stainless steel pipe was located in a confined space at a height of 20 feet with access only available via a ladder.

To repair the leaking pipe in the biomass boiler power plant, the farm therefore needed a flexible repair method involving lightweight materials which could be easily applied from the top of a ladder.

Sylmasta recommended a SylWrap Universal Pipe Repair Kit for the application. Wrap & Seal Pipe Burst Tape was wrapped around the pipe, fusing into a solid rubber band over the leak area for a high-pressure repair.

A SylWrap HD Pipe Repair Bandage was then applied over the top of the Wrap & Seal. SylWrap HD features a water-activated resin. It cures within five minutes to provide a rock-hard, impact resistant layer to the pipe.

The materials in the SylWrap Universal Pipe Repair Kit are temperature resistant to 200ºC, enabling the repair to withstand conditions within the heating tank. To further protect the pipe, a steel deflector plate was tied to the top of the SylWrap HD Bandage.

Completing the repair took less than 30 minutes, cutting downtime of the biomass plant to a minimum. It was carried out by the farm’s own engineers, negating the need to hire contractors, and cost a fraction of fitting a replacement pipe.

The engineer in charge of the repair told Sylmasta afterwards he was pleased with how straightforward the application had been. With pipes a huge part of biomass systems and agriculture in general, Sylmasta are now advising on other ways in which their pipe repair solutions could benefit the sector.