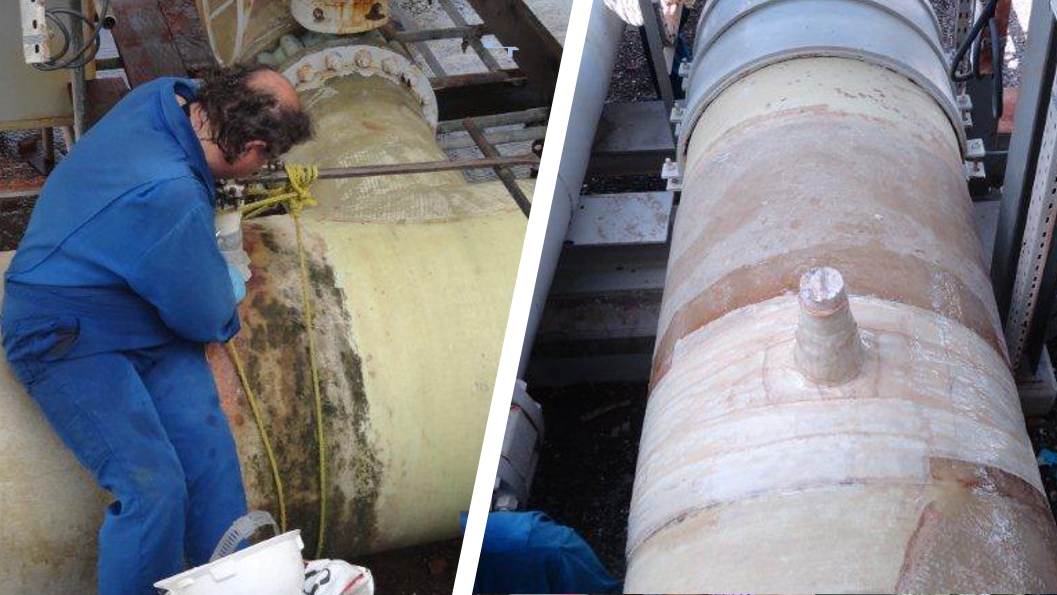 A petrochemical plant in Saudi Arabia needed an urgent repair to the 1500mm main supply line in their seawater cooling system after a nozzle snapped off, leaving a 50mm hole discharging water 5 metres vertically at a pressure of 3 bar.

Seawater cooling systems allow water taken from the sea to be used for the cooling of machinery and other processes in industrial plants and factories.

The petrochemical plant were extracting from the Red Sea. A nozzle on the 1500mm diameter main line supplying the cooling system had snapped off from the flange, causing a jet of pressurised water to shoot 5 metres into the air from a 50mm hole.

When this seawater returned to ground, it saturated the surface of the pipe, causing external damage, discolouration, mould to form and a suspected weakening of the line.

Losing so much water also had a serious impact on the efficiency of the system. The plant therefore decided to call in a maintenance team to attempt to fix the problem as a matter of urgency.

The supply line was shut off whilst the repair took place. The application began by securing the hole left in the pipe by the snapped nozzle with a plug made from PTFE.

To create a watertight seal around the PTFE plug and fix it in place permanently, the nozzle was then encompassed using Sylmasta AB Original Epoxy Putty.

Sylmasta AB is a smooth-setting putty capable of bonding to all materials, including wet surfaces. It has a two hour work time, allowing more of the putty to be mixed, shaped and applied without premature curing that may have otherwise been caused by the hot Saudi climate.

Further reinforcement of the plug and the surrounding AB Original was provided by SylWrap HD Pipe Repair Bandage. SylWrap HD is a composite wrap with a water activated resin which sets rock in hard in minutes.

Seven layers of SYL412HD were wrapped and smoothed around the nozzle, creating an impact resistant layer of protection. This completely sealed the hole with a repair pressure resistant up to 30 bar.

When the line was put back into operation, the engineers who had carried out the repair noticed during their inspection that the pipe around the nozzle had indeed weakened as suspected.

Although no major leaks were present, the surface could be seen bubbling with air and water. They therefore decided to reinforce the entire area of pipe underneath the nozzle by wrapping the 1500mm diameter with four SYL616HD Pipe Repair Bandages.

This provided a protective sleeve around the weakened section of the line, strengthening it against potential future breaches and thus extending the lifespan of the pipe.

Completing the repair of the nozzle and the reinforcement of the line took less than two hours, after which the seawater cooling system was able to operate at full capacity once again.

Category: Case Studies
Tags: AB Original, SylWrap HD Pipe Repair Bandage
Cookies are used to ensure you are given the best experience on our website. By continuing to browse the site you are agreeing to our use of cookies.OkPrivacy policy