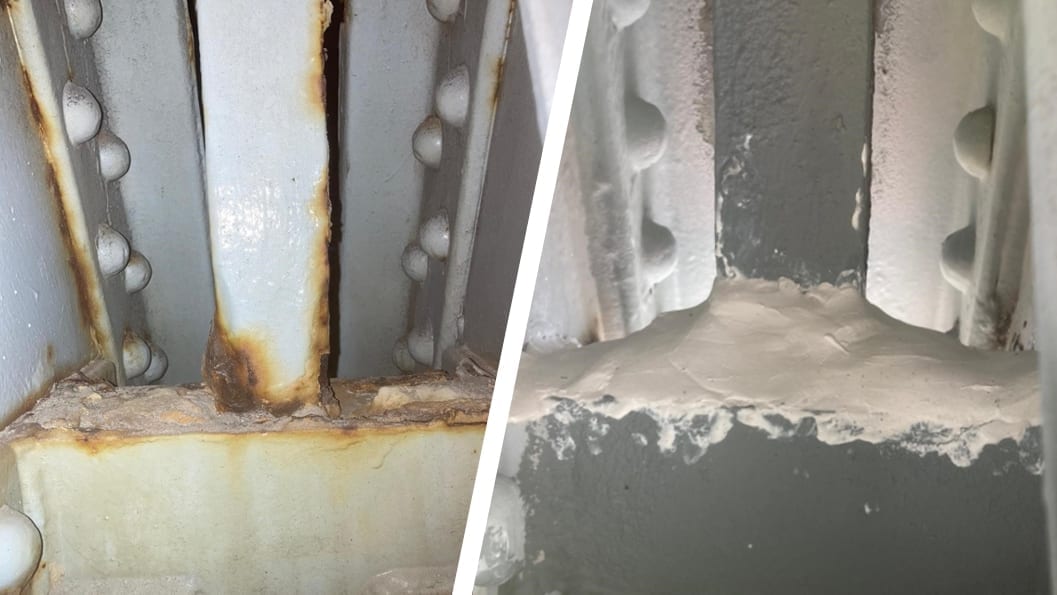 Water collecting around hangers on the deck of the Menai Suspension Bridge was beginning to cause rust, leading a mechanical solutions company to encapsulate the joints with Sylmasta AB for protection against corrosion.

The Menai Suspension Bridge is a Grade I listed structure connecting mainland Wales with Anglesey between the city of Bangor and the village of Menai Bridge. It is one of two bridges across the Menai Strait, along with the nearby Britannia Bridge.

Over 100 suspender cables connect the two main cables running between the towers of the Bridge with the deck via hangers entering a metal frame. When rainwater entered the inside of this frame, it was able to gather in pools at the base of the hangers, causing rust to appear.

To protect the hangers from further corrosion, it was decided to encapsulate every hanger end with a waterproof material which could be shaped and formed into a slope, allowing water to run-off onto the concrete below.

Any material also needed to be easy to apply in a confined space. Each cable hanger was located in a tiny, box-shaped space inside the metal frame, making access difficult.

The mechanical solutions company carrying out the application decided to trial a small amount of Sylmasta AB Original Epoxy Putty to test its suitability for the application. Sylmasta AB is ceramic-filled, making it harder wearing and stronger than most other epoxy putties.

Its water resistant qualities mean that Sylmasta AB is regularly used for marine and underwater repairs. In pipe repair, it is used because of its high resistance to chemicals and corrosion. All these attributes made Sylmasta AB the ideal material for the job.

After successful testing, the mechanical solutions company approved Sylmasta AB for use. The corrosion protection application was to be carried out in two phases, with a significant quantity of AB delivered to the Menai Suspension Bridge for phase one, involving around 50 hangers on one side of the bridge.

Each hanger was cleaned via extensive sandblasting to remove existing rust and grime. Sylmasta AB was then applied around the base, creating a smooth run-off, down which water would drip. Rainwater would no longer coming into contact with the base of the hanger or be able to pool around it.

The two-hour work time of Sylmasta AB allowed the engineers to mix, shape, and apply the putty to each hanger without the threat of premature curing. Sylmasta AB achieves a full cure in 24 hours.

Once it had been established that phase one of the repair had been successful, further Sylmasta AB was sent to Wales for phase two. All the hangers on the Menai Bridge have subsequently been provided with corrosion protection to keep them operational for many years to come.

Category: Case Studies
Tag: AB Original
Cookies are used to ensure you are given the best experience on our website. By continuing to browse the site you are agreeing to our use of cookies.OkPrivacy policy