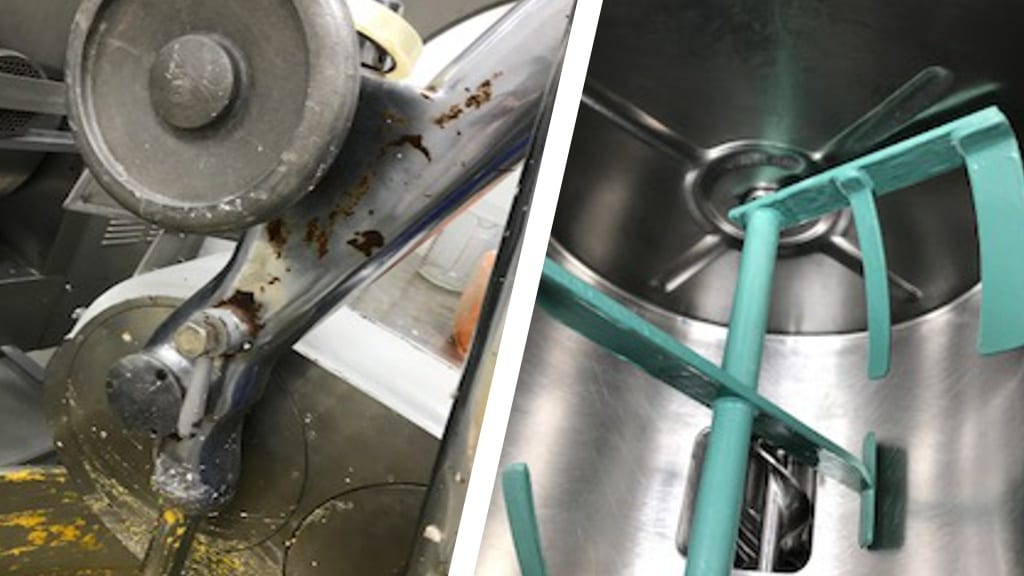 Corroded blades in a commercial bakery’s flour mixer looked like they would force a costly shutdown of equipment, until Sylmasta came along and saved the bakery a load of dough – in more ways than one.

The mixers in question were used by the bakery in Puerto Rico for mixing flour and other ingredients together to make turnovers sand other products.

During one of the regular inspections carried out to the blades, it was noted that they had suffered heavy corrosion and production had to be halted until the problem was resolved.

Replacing the flour mixer blades within the two machines would have cost $3,000 per blade. As if spending $6,000 on new parts wasn’t bad enough, the blades were not available from stock.

This meant that replacement blades would have to be built from scratch, a process that would have left the bakery unable to fulfil orders already made or take any more for the foreseeable future.

$6,000 to replace the corroded blades and many weeks of lost production. The bakery was looking at losing a lot of dough both in terms of money and the delicious baked goods that it made.

As a result, the bakery urgently needed to find a better solution to repair the corroded blades in their flour mixer. They turned to Sylmasta Ceramic Brushable Green.

Ceramic Brushable Green is a toughened, solvent-free, water-resistant coating that is painted onto machinery to reinforce and strengthen equipment.

It provided a protective layer for the blades against both corrosion and the general abrasion that comes when mixing flour and other ingredients in the baking process.

Because Ceramic Brushable Green offers such a smooth finish and is easily applied, the bakery was able to restore its flour mixing machines to full working order almost immediately.

The blades themselves ended up looking like new at a fraction of the cost of a replacement. They won’t need to be serviced again for a long time either because of Ceramic Brushable Green’s high abrasion resistance.